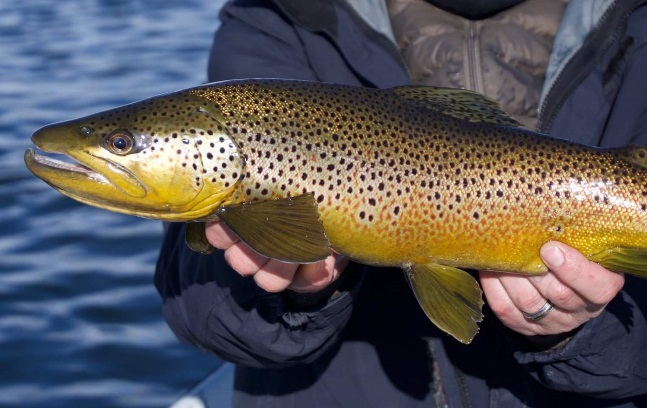 It was dark when we met, and cold. Lee and Shane were already in waders, clouds of breath fogging their glasses, bundled up in layers hoping to keep the frigid temperature from seeping in. We looked like the holidays had been to kind with calories (they were), but the key to warmth is bulk and I am a believer in down and wool. That makes me a bit old school but I figure if it can keep critters warm in subzero conditions, it will work for my chubby butt too. The three of us are good buddies who had not had a chance to hit the water together for more than 2 months, so we were pretty pumped to get after it, despite the certainty the day would hold a lot of icy guides, frozen appendages, and possibly a few embarrassing moments falling on your ass.

My drift boat was ready and they followed me to the put in an hour’s drive away. I never listen to the radio on the way out. I tend to obsess over approaches and patterns and rigging, talking to myself the whole way up, which is funny since it all goes out the window once the reality of the day actually unfolds. We were leaving too early and knew it. Fishing in the winter is best in the middle of the day, but for several years it had become a point of pride that we would be the first boat of the new year on the river and I guess we worried some ambitious soul would beat us to the launch. It’s not important, but games like these lead to adventures sometimes, so I like them. We had actually only seen a thin hand full of fishermen along the bank, and never another boat, in all the years we had done this but we were still worried.

We knew drift boating in January, in the Rockies, can be dangerous. Just the drive into this remote area is sketchy, and if a guy somehow falls over board he is in real honest-to-god trouble. The weather changes fast, vehicles can fail to start, and phone service is sketchy. I told the guys if we got stranded somewhere and had to survive until spring they could eat me, just let me get a few trout first. Anyway, we had all the needed survival stuff on board and it’s a bathtub float with no rapids so while we are aware of the possible dangers, it has never been enough to stop us. Besides I had a new 6 weight streamer rod from under the tree and it was begging to be baptized.

The sun was up about 40 minutes when I took the oars. Lee and Shane always argue they should row first, but it’s my boat. Letting another guy row your boat is a little like letting another guy dance with your wife. It’s all cool and innocent, but at the same time you find yourself keeping a close eye on things. In any case, in my boat if you catch a fish, I catch a fish. It’s just how it is. They lobbed out bobber rigs, with sized down indicators on longer leaders and 5X fluorocarbon. #20 black zebra midges, rainbow warriors, and a few other tiny inventions that were yet to be named, were the flies of the day and a couple small shot got the rig down properly.

The water was low and clear, normal winter conditions, and the fish would be spooky so minimizing disturbance is key. Lighten up on your rigging, don’t thrash up the water, keep the boat quiet and your voices low and you can still get pretty close. Steam rose in an eerie fog off the water, accentuated by the bright sun, and the only sound was a flock of geese in the distance. The cold air froze my nostrils. It was glorious.

One little trick to winter fly casting is to not strip much line through the guides and cause them to ice up. We fed out just enough to hit the fishy spots and keep the rigs a reasonable distance from the boat. The oarsman does his best to position the boat in a way to minimize the need to move line through the rod, and if all goes well you won’t have to break ice out of the guides more than every 10 minutes or so. When your guides do freeze up, all you can do is break it out with an ungloved hand, which does suck. Under no circumstances should you ever get your reel wet. It will instantly become as useless as a tenkara rod.

We played with depth and weight settings a little bit, but pretty quick we were into fish. Shane landed a fat 16 inch ‘bow in a long deep trough with moderate current and Lee hooked and lost a fish he thought felt pretty heavy. Little #20 flies pull free easy as they don’t hold a lot of meat, so you do have to baby them. Shane kissed his fish and released it (another tradition – your lips must actually touch the first trout of the season. Period.)

Anyway, I rowed back up river and made the same run. Lee scored on a chunky cut (which received the required loving kiss) and Shane grabbed another solid ‘bow. We repeated the drift half a dozen times, weeding through some whitefish but scoring a few good trout in the process. As Lee said in his eloquent style, “Hey your rods bent and its freakin’ January. Don’t whine about whities.”

We eventually swapped out rowers and I got a chance to sling the new 6 weight. I chose a #4 flashy streamer I had spun up the day before, and started working it with quick short strips and long pauses. Trout will not move very far for food this time of year, but a big easy meal right in their face, at a time when big easy meals are scarce, is sometimes productive. I love streamer fishing, but it requires extra patience in the winter. Every 4 or 5 casts required clearing the guides, and my hands were quickly numb. I was thinking of switching to nymphs, when I strip set on something heavy. After a solid fight, a thick butter belly brown came to net, breaking in that 6 properly, and it was my turn to kiss a trout.

That’s how it went the rest of the day. We caught a bunch of trout and white fish in the deep slow stretches, a few were over 20 inches, and everyone had plenty of action to feel like the cold was worth it. We had a couple doubles and I even caught a small lake trout that slammed that flashy streamer thing right at boat side. We never saw a rise that day so the dry fly midge fishing I had dreamed about never materialized, but no one cared. When we got cold we would stop and warm up with coffee or a few minutes by the portable propane heater Lee had brought along.

We bantered around the way guys do when they are having fun, hardly saw a soul, and ate elk jerky, sardines and left over Christmas cookies for lunch. No one had to resort to cannibalism, and as best we knew we were the first boat on the river again. Honestly, I just don’t get why more people don’t fly fish in the winter. They must really love TV.

We got home a bit after dark. Music always sounds better on the radio after you have had a good day on the water and I sang loud and off key the entire way home, which is probably why Shane and Lee rode together in Lees truck. My wife had ordered pizza and it was still hot, so I warmed up with that and told her semi-embellished stories of our adventures, then sat down at the vice. Time to tie more of those flashy streamers and midge larvae.