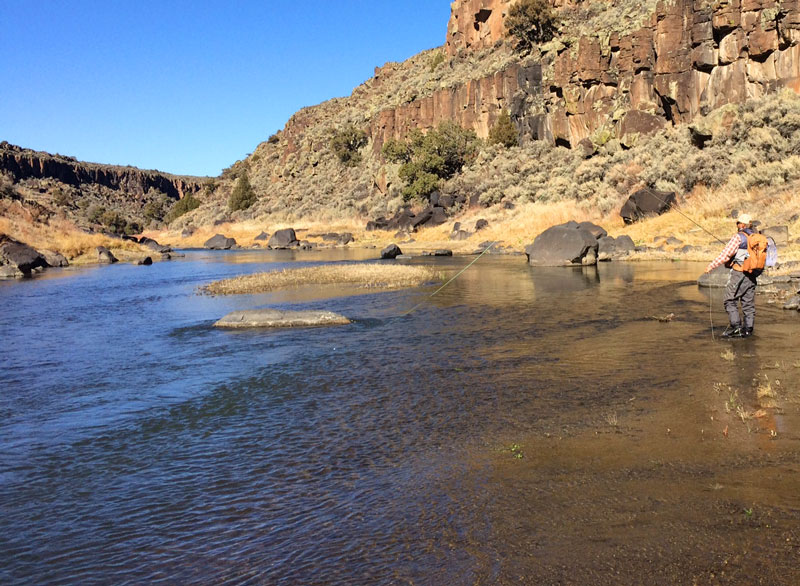 When most people think of flyfishing the Rocky Mountain West, they probably imagine themselves standing hip deep in a broad western river, casting 30 to 40 feet of line into a deep riffle or pocket they can’t reach by wading. Or floating down a big river in a drift boat, pounding the banks with a big attractor and anticipating the slashing attack of a wild trout. But the reality is that the majority of western flyfishing water is in the form of small streams and creeks, most of which have yet to be discovered by all but the most adventurous anglers.

You see, all those big rivers actually start high in the Rockies as tiny creeks born from melting snow and underground springs. All you have to do is look at a good map of any part of the Rockies and you’ll see that there are thousands of small streams and creeks, most teeming with trout. Yet about 80 percent of the anglers I meet are fishing on the big rivers, usually floating, and rarely getting out of the boat. I like floating and fishing from a drift boat as much as anyone because it allows me to reach places I otherwise can’t, even if it’s just the other side of the river. But there is a lot of other water to explore.

Things have changed over the years as flyfishing has become popular and somewhat of an industry. Gone are the days when you are the only angler on the river. Today, on some rivers, boats wait in line to fish the next hole, and other boats and anglers are never out of view. It certainly isn’t a solitary experience. And for an angler like myself, who learned to flyfish on New Mexico’s waters in the early sixties, the main reason for going fishing has always been to get away from everything and be alone with nature. I certainly don’t fish for the social aspects, and I don’t know why anyone would want to fish where everyone else is fishing, although in a way I’m glad most anglers don’t mind it. As long as those anglers are pounding the famous waters—providing good business for the guides, outfitters, and fly shops near those rivers—they won’t be pounding the more sensitive, fragile small streams and creeks.

I accept the fact that it’s all relative and that what used to seem like a lot of fishing pressure to me may seem like almost no pressure to someone who just started flyfishing. For example, I used to get upset if I saw even one other angler on a 5-mile stretch of the Rio Grande near Pilar during the caddis hatch. Now I’m happy to find a riffle that’s not being fished. As the sport gets more popular, I get more used to seeing other anglers on “my” water. Also, I have to accept the fact that I have been part of the reason flyfishing is more popular in New Mexico, since I have been guiding anglers for over 20 years and writing about flyfishing for 15 years.

Most of the best flyfishing in this country is on the many tailwaters, below dams, which are not natural rivers. Before tailwaters were created, there was very little flyfishing pressure in the West. Indeed, about 80 percent of the angling pressure in this region today is on about 20 percent of the fishable water. Tailwaters have created a whole new breed of flyfishers and are, in my opinion, the single most significant reason for the explosion in the industry. Most guides, outfitters, and fly shops exist because of tailwaters.