About Flyfishing in New Mexico 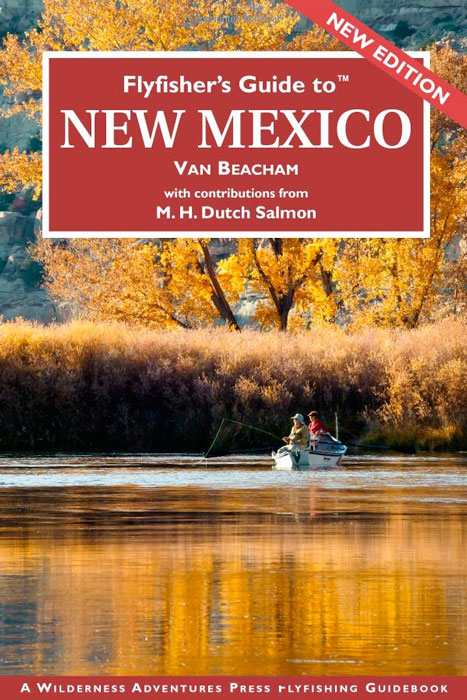 The information in this book is based on my own experience and that of other anglers who’ve fished here over the last 46 years, when we had normal or above normal water flows. It’s important to note that until about 10 years ago, New Mexico had been in a very wet, 30-year cycle. But from about 1998 until 2005, New Mexico, along with much of the West, suffered from an extended drought, and some of our streams and lakes definitely took a beating. From 2005 to the present (2010), we have been averaging above normal precipitation again and things have improved dramatically, although not fully. Still, depending on future conditions, some may not resemble anything like the descriptions in this book, so it’s always important to check local conditions before heading out.

New Mexico is rich in angling diversity even though it’s the second driest state in the country. Every region offers excellent flyfishing for coldwater and warmwater species. From high-mountain lakes and streams to remote desert canyons and gorges, there is something here for every angler to enjoy.

Opportunities abound year-round. Northern New Mexico is situated at the southern end of the Rocky Mountains, and southern New Mexico also has some very intriguing high mountains. In between is a high desert where the cold water becomes warm. Many of these high desert areas offer great winter flyfishing, and in some of the “cusp” areas there are different species active at different times of the day and/or year.

For instance, in the Rio Grande Gorge, the best trout fishing is during fall, winter, and early spring, while late spring and summer is best for smallmouth bass and northern pike. (Pike are also active in late winter and early spring, and trout will feed furiously in the middle of summer during late-evening and nighttime hatches.)

Not only does our southern latitude provide mild winter temperatures and lots of sun, but our high alpine areas offer mild summer temperatures, as well. So when it’s too hot in the gorge, it’s just right in the mountains. Hatches also occur yearround, and some of the best dry-fly fishing in the state can be found on the legendary “Special Trout Waters” of the San Juan River. In the dead of winter, you can find solitude, hatches, and rising fish on a little-known spring creek in southeast New Mexico known as the Rio Penasco.

The information here is divided into four regions, and there is a special section on private waters because some of the best flyfishing is on private property. In recent years, a lot of these fisheries have been protected, developed, and opened to the public for a fee. Because many of New Mexico’s streams are small, there is also a special section on flyfishing tactics for these waters.

There are detailed maps of the majority of the lakes and streams in the state, with parking areas, campgrounds, access points, and river miles highlighted on each. At the end of each fishery, there are “Stream Facts,” which offer concise summaries of the waters described. There’s also a list of important agencies, campgrounds, and outfitters for easy reference.

In the hub city information at the end of each section, you’ll find all the resources you need to plan a visit. My hope is that you’ll be able to arrange your next flyfishing trip entirely from this book. If you can’t, write me about what you think I need to include in the next revision.