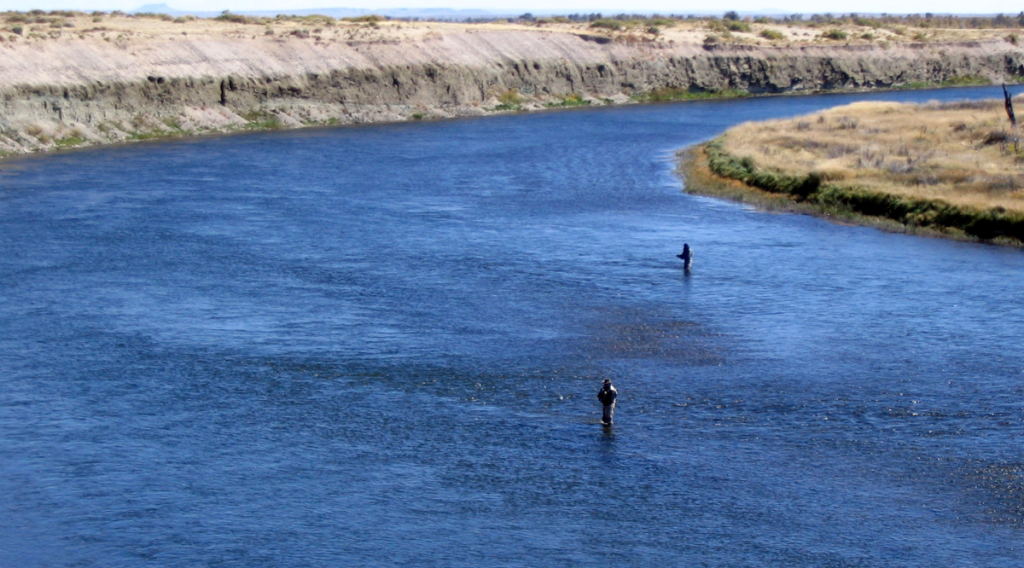 My clients were two old friends. Buddies since college, they had lived in the same city for more than 30 years. From the constant stream of inside jokes and semi-raunchy stories it was clear they had shared a lot of life; Marriage, kids, the corporate ladder, and fishing together as much as their wives and careers would allow. It was a friendship that transcended blood relation… they were brothers. Eight years earlier, as sometimes happens, life took both men to opposite sides of the country and this annual fishing trip was all they had left to stay connected, to be the wild young guys they once were… at least for a little while.

I enjoyed their company. They were good anglers, but also understood the value of a day is best measured by laughter, shared experience, and reconnection. That said, the fishing had been excellent. A couple dozen good trout had been netted, each triggering a celebratory sip from a tin whiskey flask. By our noon lunch break their good natured ribbing had a distinctly boozy vibe. We were all having a blast.

They needed to be off the water by four to catch their flights home, so I was forced to confiscate the mostly empty flask, which was reluctantly handed over with a sarcastic “Ok Mom”. We pushed off to finish the float, found a few more fish, and arrived at the take out only 20 minutes late. A hint of sadness seasoned the banter as they helped load the boat and stow gear. Neither man wanted the day to end, but after five days of fishing both also felt the pull of home and family. Handshakes, slaps on the back, and promises to stay in touch were exchanged and we parted company. It was the sort of day that makes me grateful I am a fly fishing guide.

Since it was still early, I decided to fish a nearby run before heading home. Rod in hand, I bush whacked through the willows 100 yards downstream from the take out. Wading out onto a mid-river gravel bar, I began working a streamer through a deep, fast run.

Methodically fan casting an area then moving a few steps downriver is one of my favorite ways to fish. It requires enough focus, you don’t think about much of anything other than what the fly is doing. But I found my mind wandering, reflecting on the friendship of the two men. How honored I felt to be a part of their experience and privileged being allowed a window into their long friendship. I thought about how rare that sort of thing is in what seems to be an increasingly fast, shallow world.

Then I hooked a fish.

The pulse through the rod was strong, pulling me out of my thoughts, and I reflexively shouted, “big head shakes.” The fish ran hard downstream and I was quickly deep into my backing. “I’ll need to chase this one, try to pull it to the frog water over there. He’s on 1X, so I can put some pressure on, but if I don’t move him away from those boulders its game over.” The cottonwoods swallowed my narration without comment.

As quickly as one can move in eight inches of water, I made my way downstream keeping as deep a bend in the rod as possible. I was gaining some line when, as big fish are prone to do, he rocketed back up river, the current creating a deep bow in the fly line. “Shit… I don’t know if I can catch up to him.” Stripping line for all I was worth I somehow managed to come tight again. Slowly I persuaded the fish back my way, easing him a round a large boulder and into the calm water out of the run.

He was beginning to tire. His next few runs were shorter and, thankfully, never back into the heavy current. Popping the net free from my vest I raised the rod as high as possible, straining it and the tippet, inching him my way. Finally he rose to the surface and turned on his side, the net slipped under him and it was over. He was glorious. A thick, hook jawed brown of perhaps 28 inches, glowing bronze in the fading light, the largest I had seen in sometime. I was shaking with adrenaline. “Did you see all that? What a brawl! Man I really didn’t think I’d land this fish. Dude this is so cool that…”

What was wrong with me? I had been alone the whole time, I knew that. But in the excitement of things I had slipped into a different place, somehow forgot where and when I was. Of course no one was there. I knew he was gone. My friend. My brother.

Barry and I had been buddies for more than 20 years, sharing our victories and tribulations as young men and anglers on a daily basis… before the cancer took him. It had been nearly seven years since his death. I shook my head, confused.

But in that moment, in the pure childlike excitement of battling a huge fish, he had been undeniably there. I felt it so clearly, so effortlessly, I spoke to him as if he was standing next to me in the river.

I released the fish, watching it slowly swim away through the shallows, ultimately fading back into the depths of the run. Gone but for the memory of it.