The 1-2 punch for steamer fishing trout 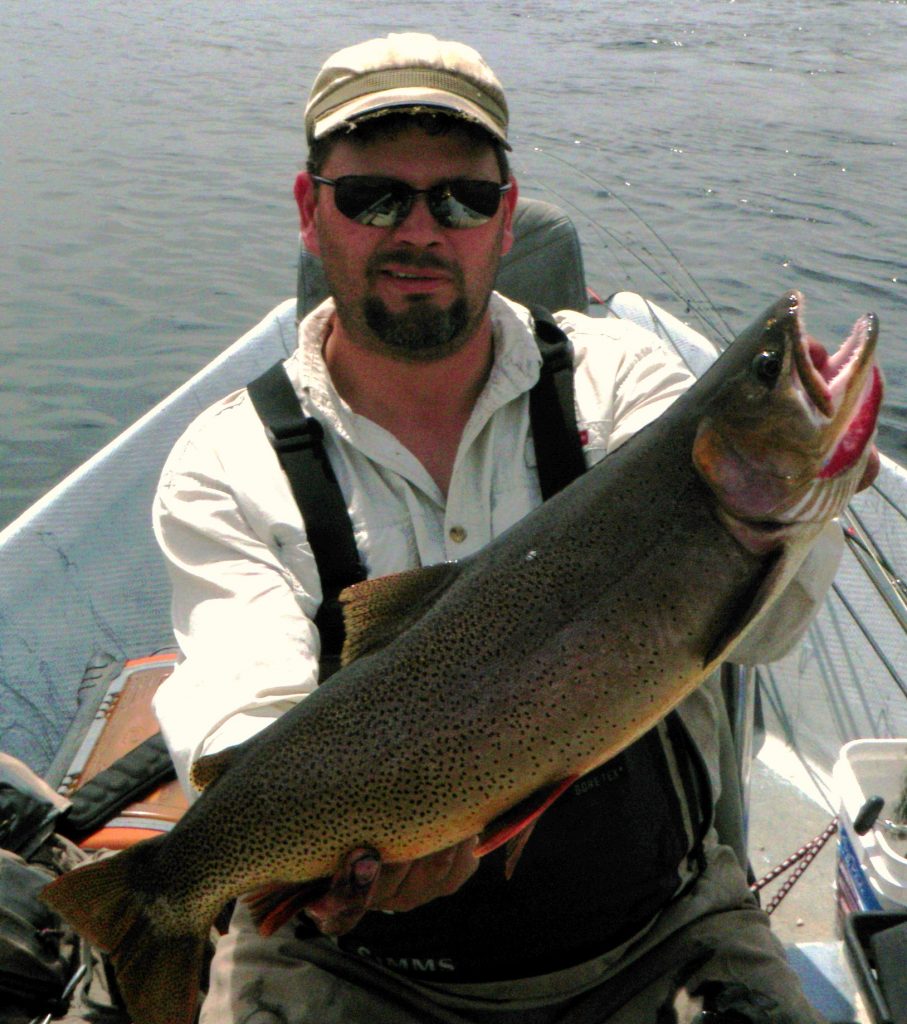 In boxing, the “one-two punch” is a nickname for a jab and cross combo designed to fake out your opponent and land a solid shot in the kisser. In streamer fishing, a somewhat similar approach can be effective. Now, I’m not talking about chucking tandem streamers. That works and is a great technique that will certainly work within this system. This 1-2 punch involves two anglers, working together, in a systematic approach to catch big, meat-eating trout from any stream they reside in. Here’s how it works…

The lead angler is positioned in the front of the boat, or if wading, works down the run first. He or she throws a standard streamer rig, swinging runs and pounding banks and structures with quick casts and rapid retrieves in the same way it is often done. For gear, I like a 7-weight with a 5 to 10 foot sink tip line, and a leader of 4 to 5 feet of 1x fluorocarbon loop knotted to a large streamer. Big flashy attention grabbing patterns work best for this approach as matching forage is not in the cards here. We want a fly that wakes fish up, gets them to move, and if not outright eat the thing at least move to check it out. It is important for the lead angler to pay attention and call out all activity they see. Any bumps, follows, flashes or weird shadows ought to be described to the rear angler so he or she can respond. This is where the second half of the system comes into play.

The back angler fishes an indicator streamer rig. I like a 7-weight rod with a floating line, rigged with a simple football shaped foam indicator on a 7 1/2 foot 0X leader and a couple feet of 1X fluorocarbon tippet. To this, loop knot a heavy streamer that trails a smaller lighter offering behind it two feet or so. Think big, fluffy, leggy creations with lots of motion, paired with a smaller unweighted leech, bugger, crayfish, or flash minnow. The rear angler drifts this rig through fishy looking stuff with short quick strips, twitches and pops thrown in here and there. The idea is to make it look stunned and vulnerable. The football shaped indicator, which is just large enough to suspend the streamers, helps minimize surface disturbance and pulls more smoothly through the water when stripped. A totally drag free drift is not needed, or even desired. Just stay in contact and keep it low and slow. Strip set on every movement of the indicator, even if you are sure it’s just bumping bottom.

The idea here is simple. The lead angler is probably moving more fish than they are able to detect. While they should get their fair share of hook ups, many trout break away for one reason or another before they have a chance to fully commit. Those trout are worked up and excited to eat. When the rear anglers big wounded offering comes floating into their zone, they attack it. This is improved further as the lead angler describes where they saw some action so the rear angler can refine the position of their rig and, hopefully, mop up those fish that were missed the first time.

As in all streamer approaches, playing with patterns and retrieves throughout the day is critical to cracking the code of what the fish want. With two anglers throwing 2 to 4 different patterns, that code is usually sorted out a little faster. This approach has worked well for me, becoming a standard technique in my day-to-day guiding. Give it a go next time you want to target those big flesh eaters.

PrevPreviousIf you haven’t been fishing with us, this is what you’ve been missing!
NextGood Snow Pack/Culebra Creek/Spring on the GreenNext