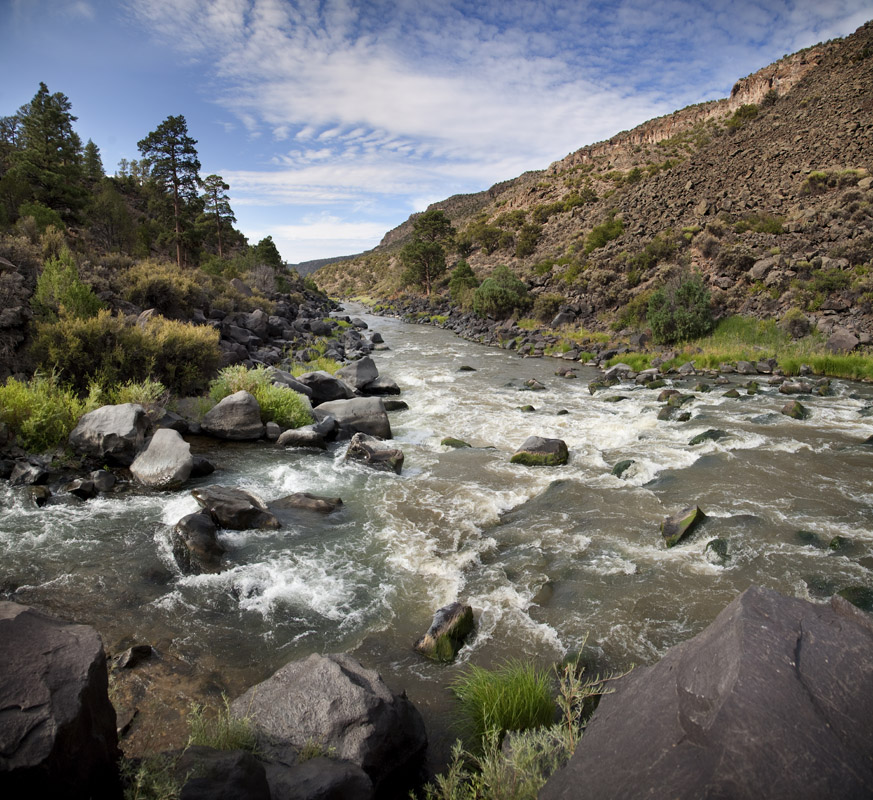 In defining a small stream or creek in New Mexico you must first put into perspective the difference in water size here compared to waters in Colorado, Wyoming, Montana, Idaho, and Utah. To explain, I’ll tell you a fish story about a fellow guide I know named Rick from Jackson Hole, Wyoming.

He came to New Mexico to ski Taos and check out the winter fishing I’d been telling him about. I took him to the Red River, at its confluence with the Rio Grande, the first day. After walking almost a mile and a half down the Gorge to the confluence he looked at the two rivers and said, “Is that the Rio Grande? And that’s the Red River? You call these rivers?”

Nodding, I said, “What do you mean? Other than the San Juan, the Rio Grande Gorge is the largest and most important river in the state, and the Red River is the largest tributary of the Gorge.”

He shrugged his shoulders and said, “In Wyoming, we call these creeks.”

We rigged up with double nymphs and headed down to the first pool in the Red River, where I immediately spotted a big cuttbow and pointed it out to him. His first cast was perfect, as was his drift, and the big buck took the small nymph. He lifted the rod and went for the reel with his left hand. Before I could say anything the fish ripped downstream so he let go of the reel, allowing the fish to run downstream into the rapids at the confluence—where it broke him off.

“Son of a bitch!” he said. “That was as big as anything I’ve hooked in the big rivers up north.”

I laughed and told him, “Next time, don’t use your reel. Strip the fish in and hold tight with a bent rod and try to keep it in the pool where you hooked it. You can’t let big trout run downstream like that in these fast, boulder-strewn rivers or they’ll get you every time.”

He looked at me as he gathered his limp line and mumbled, “Right.”

New Mexico streams are diminutive compared to streams in the northern Rockies for three reasons. First, we simply don’t get as much precipitation as those northern areas. Second, our winters are shorter and our atmosphere is drier so we have more moisture loss due to sublimation and evaporation. Finally, we’re the only state west of the Mississippi that doesn’t have an instream flow bill so there’s great strain on our waterways due to consumptive use.

Where there are feeder creeks in the central Rockies, we have tiny creeks and seeps. Where they have major rivers, we have medium-sized rivers like the Rio Grande and Rio Chama. So even though the lower Red River may be a small stream compared to other rivers, it isn’t considered one here, although some of the techniques talked about here are valuable on streams of any size. Larger rivers should be broken down and looked at as several small streams running parallel to each other. No matter how big the river, you can only fish one drift line at a time, unless you’re stripping streamers across currents.

So what is a small stream in New Mexico? If you can’t cast or throw a rock across it, then it’s not a small stream. In this context, a small stream is a stream or creek whose average summertime flow is less than 30 cfs. Depending on the grade, a stream with this flow is about 15 to 20 feet wide, although it could be as wide as 30 or 40 feet in slow pools or beaver ponds.

Most streams in New Mexico are small streams, and even some of the main rivers run less than 30 cfs during fall and winter or during drought conditions. Many fishable creeks in New Mexico are 5 cfs or smaller—only about a foot or two wide.

In Wyoming I wouldn’t even look at creeks this size, and they probably wouldn’t contain very many, if any, catchable-sized fish. In New Mexico, however, we have healthy fish populations in very tiny creeks, and sometimes these waters hold trout up to 18 inches. This is primarily due to our mild, short winters. Our creeks don’t usually suffer from winterkill. The shorter winters also translate into longer growing seasons and more abundant aquatic insect populations.

This is what makes our small streams and creeks so special; they are very productive for their size. Try one of the hundreds of such waters in New Mexico and you’ll see what I mean.

PrevPreviousSmall-Stream Flyfishing, part 2
NextIf you haven’t been fishing with us, this is what you’ve been missing!Next